Knitting, knitting, and some more knitting

Well it’s not all bad news.  I’ve been working on the Flirty Shawl this past week and discovered that my numbers were off from the scant notes I took for the first one.  My gauge is off too, because even with sevens and adding 5 more short rows on each side it looks like I’m using less yarn than I did for the one I did on sixes with fewer short rows, my knitting is that tight.  Good news is that I found the perfect spacing for the short rows, so it wasn’t a completely wasted effort.  I’m frogging it this morning and will be using it for a bit of transit knitting while we meet up with some family.  I’m also going to switch up to eights and try a little bit not to knit so tightly (if I try too hard it looks awful).  I should definitely have an in progress pic up by mid week and maybe even have it blocked by the weekend.

In other news, the sock monkey that just wont die only needs another leg to be finished.  The finished object is really cute, don’t get me wrong, but I have not had luck with the pattern, it just not logical for me.  I have several holes I have to repair, there really should have been a wrap and turn when doing the mouth, and some parts are just plain messy.  I of course missed yet another deadline for finishing it (was supposed to be gifted yesterday), but I’ll carve out a day to finish it up and get it mailed out to my nephew.  I made a comment to my husband that the only toys I’ll be knitting from now on are ones that I have designed myself, which isn’t really true but it would be easier.  Some of the problems are in the design but I think a lot is the fact that it was written in German and I’m working off an English translation.  I think there are some things that may be common in German knitting (like the messiness of the pattern in places) that just don’t translate well into American knitting.  I want it done and out of my house so I can chalk up the whole thing to experience.

Never got around to taking pictures this week for WIP Wednesday on my Facebook page, but I’ve worked on Monkey Jacobus, Grass and Bubblegum Shawl (Color Affection) got a few rows done, almost finished the second repeat of my Earth and Sea socks (Pomatomus), and of course the Flirty Shawl.  I’ll take pictures this week, but that’s what’s been doing ’round here. TTFN!

I’ve been flitting from project to project these past few weeks.  Some of them aren’t portable so I can only work on them at home, other’s only get worked on while I’m riding the bus on Thursdays and Fridays.  Here’s what’s doing.

Finally wove in the ends on this tonight and got some pictures to post.  This is the first version I did of Flirty way back in December of ’13.  The wing span is 62″ and the depth is 18″.  I’m hoping to get a bit more width out of it by going up a needle size and I also did a garter tab at the top so it looks neater.  Here’s where I am with version 1.1.

I’m using Madelinetosh Tosh Merino Light in Georgia O’Keefe.  When I first looked at the skein I thought it was a dark blue, but knit up it’s definitely more green.  I have one more eyelet repeat to finish before I start the short rows that will add to the wing span, then onto the ruffled edging.  I’m hoping to have the knitting on this done by the end of the weekend. 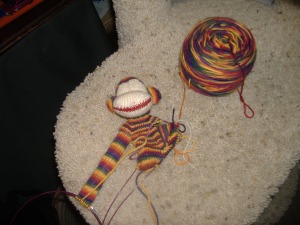 Earth and Sea Socks (aka Pomatomus)

These really only get worked on during my commute to appointments on Thursdays and Fridays.  We’ll see how much progress I can make this week.

I’ve been able to add a couple of more stripes since I started it on the 14th considering I’ve had the yarn for almost a year.  The colors in Madelinetosh Tosh Merino Light are Jade, Lepidoptra, and Clematis.   It’s getting time to switch to a longer cable so I can stretch it out.  It’s reached the point where it’s not really portable knitting any more so it will probably only get worked on on Wednesdays during Thing 1’s appointment where there is a nice couch in the waiting room where I can arrange the yarn balls around me.  I’d like to get this finished sooner than later but there are other things ahead of it in the queue.

That’s all for this week.  I still have gloves that I’d like to finish before the cold weather is gone, but that’s another at-home project so we’ll see what happens with those.  There’s also a sweater but again I don’t know if I’ll have the time to finish it before winter ends.  Maybe if I can manage my knitting time better I’ll be able to start cranking out some projects.  TTFN!

I received a set of ChiaoGoo US Size 1.5 (2.5mm) 40″ circular needles this for Christmas from my oldest.  I had heard good things about these needles — the joins were good, the cable nice and best of all they were pointy.  When I opened the needles, my first thought was how was I going to get all those kinks out of the cable.  Unlike most needles, the cable on ChiaoGoo needles is a wire mesh cord covered in nylon and I couldn’t see that untangling in a pot of boiling water like I use for my regular needles.  I needn’t have worried, as soon as the were out of the package the cable uncoiled straight as can be.  It reminds me of the old Addi gold cables which you could also use right out of the package.

The second thing I noticed was the bend at the end of each needle.  I wasn’t sure how I was going to like it, but where the bend is makes the needle fit perfectly and comfortably in my hand.  I also thought the bend was going to be a problem with sliding stitches onto the needle using magic loop.  I’m a tight knitter and I always spend a bit easing those last couple of tight stitches over the join onto the needle.  No such problem with the ChiaoGoo.  The joins are so smooth that the stitches just glide past with no struggle.  Some of this has to do with the yarn I’m using which doesn’t have a lot of stretch so I’ll reserve judgement until I use a stretchy yarn, but I have a feeling I’ll get the same results.  Again, the joins are a throwback to the old Addi gold cabled needles with their near invisible joins.

Perhaps the best of all is that they are pointy!  I’ve been working on Pomatomus all morning and the twisted stitches haven’t given me a problem at all since the point just glides effortlessly through the back loop and I don’t have to do that thing where I stick the left needle in front of the right needle through the back loop then twist the needles around each other to get the left hand needle behind the right hand needle.  I’ve performed this maneuver so many times with my Knit Picks’ needles that doing twisted rib was a major pain.  The true test will come with a M1R of which there aren’t any in this particular sock so it’ll have to wait.

This is my Knit Picks US size 1.5 (2.5mm) needle after knitting a pair of socks.  It was quite literally a pain to use.  I knit very tightly and the bend shortened the amount of usable needle to half the length which cause a great deal of thumb pain while I was knitting.  I was looking over the Knit Picks page and all it says is that they are nickle plated, but I don’t know over what.  The ChiaoGoo needles are stainless steel so we’ll see what happens to the needle after I’ve been using it for a while.  I expect a slight curvature, but I’ll be very disappointed if this happens with them.

Half a repeat into my first Pomatomus sock I’m very happy with the performance of these needles.  I have no pain in my hands using them, ktbl’s are a breeze, and the cable is nice and straight with no kinks.  I’ll revisit this once I’m done the socks and see how they’ve held up.