Knitting, knitting, and some more knitting

I was so ready to get my snowman pattern together to publish it at long last but it was not meant to be this year.  A mix of life, school and illness saw to that and by the time I was ready it really was too late to do it for this season.  I’m thinking of doing a Christmas in July thing this year and publishing it then but we’ll see.  Regardless, it’ll be ready to go up by the beginning of November next year for sure.

My needles haven’t been completely idle this season even though I didn’t get as much knitting done as I’d have liked to.  Here’s what did happen. 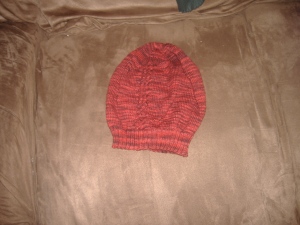 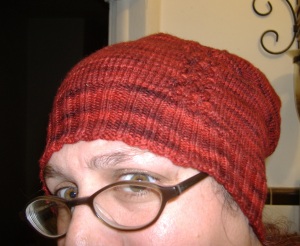 This is a very nifty pattern designed by one of the ladies on my Facebook knitting group.  Dunloe is a slouch hat knit with fingering weight yarn.  I’ve had this skein of Dream in Color Smooshy from Hidden River Yarns in my stash since last winter, thinking I’d knit myself some socks from it when I decided I needed a new hat and used it for Dunloe instead.  It’s hard to see in my pictures, but there’s a six-stranded braid that grows out of the ribbing at the brim.  I haven’t blocked it yet to make the cables stand out more because it’s huge on my ginormous head already.  I followed the advice of the ladies on my board and used the regular size, but doing the body of the hat on US Size 3 (3.25mm) needles instead of the US Size 2 (2.75mm) needles called for in the pattern.  It’s more than roomy enough to accommodate my hair clip, which is nice and the brim is snug enough that it isn’t going anywhere unlike my Noro Slouch Hat that I made last year that always feels like it’s going to fall off.  It was a fun knit, easy to do without a cable needle, and took me a week to make. 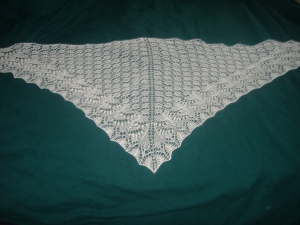 I knit this the summer when my youngest was about 6 months old in between nursing sessions five years ago.  I’d always intended to give it to my mom but this year I actually dug it out and got it blocked so I could give it to her for Christmas.  It was a major miracle that the moths hadn’t gotten to it, the worst that happened was the yarn yellowed a bit.  It’s the Swallow Tail Shawl done in some merino/alpaca/silk blend lace weight for which I’ve long since lost the ball band for.  I remember it being a fun knit and it gave me my first taste of Estonian lace with the lily of the valley pattern at the bottom of the shawl.  It’s also reminded me that I need to get blocking wires if I’m going to be doing any more lace knitting (which I hope I shall since I have a whole cone of lace weight from my trip to NYC). 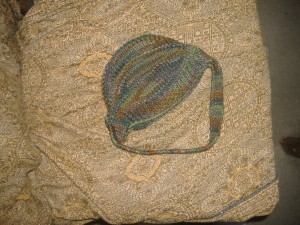 This is the Aviatrix Hat knit in Madelinetosh Tosh Vintage in Plaid Blanket in the 3-6 month size.  It was an incredibly easy knit, only taking me two days to finish which probably would have only been one it I worked on it more.  I really like the pattern and the way the yarn looks in it.  I didn’t do a gauge swatch but winged it with US size 6 (4.0mm) and US Size 7 (4.5mm) needles.  This yarn grows a lot when it’s blocked and I definitely hit gauge after I blocked it. 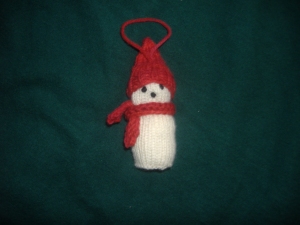 This was the only one I actually got finished this year because I just ran out of steam once OI realized the pattern wasn’t going to be published this year.  I actually knit the hat and scarf Christmas morning, because it isn’t Christmas unless you are still knitting an hour before you are supposed to be somewhere.

I hope everyone had a happy holiday.  I have to weave in the ends of the Oaklet Shawl this weekend so I can add that to my list of 2013 knitting before the year ends.  All in all it wasn’t a bad year.  I have definitely been more productive in the past, but considering what I’ve been dealing with I’m happy I got done what I did.

Now that it’s been gifted I can finally let the cat out of the bag and reveal two parts of the sooper seekrit project.  The main project, a rainbow sock yarn blanket, has been in the works for four months.  Here’s a pic of it pre-washing and blocking. 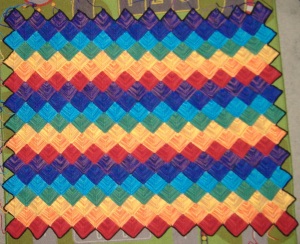 I’ve been calling it the Sock Yarn Rainbow Baby Blanket of DOOM these past few months.  If you’ve ever made one of these before, it’s not a task for the faint of heart, each one of those squares takes 30-40 minutes to knit.  The first snafu happened when Thing 1 decided he would help me out by trimming all of the ends from the top squares and the beginning and end pieces of the crochet border, all waiting to be woven in.  I got some good advice on one of my knitting boards and reinforced the top of each square with a new piece of yarn.  With baited breath, I put it in the washing machine and prayed that my fixes would hold.  When it came out of the wash, a corner of one of the internal squares had come unraveled due to what I can only guess was a weak spot in the yarn.  I was devastated.  The morning of the shower had me looking up instructions on how to darn a hole and I made a passable patch, one that was glaringly obvious to me but something everyone else had to look for.  I took the blanket home with me after the shower so I could put it through the wash again to make sure the patch held.  You can see where this is going — it separated on one side.  I must not have gone in deep enough on that side so now I have to fix it again.  It’s currently drying on my banister and I’m hoping I can do the fix tonight.

On a happier note, part two of the project did turn out all right. 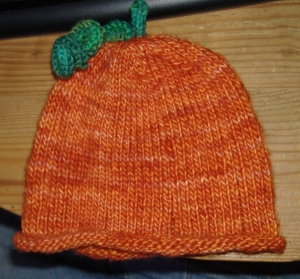 The green vine lost some of its spring in washing, but that’s an easy fix.  She loved both of the gifts and part three is waiting to have ends sewn in and to be blocked and washed.  Once that’s been gifted, I’ll post pics.

I seem to have some bad knitting mojo going on right now.  Between the hole in the blanket, the almost three inches of shawl I had to frog because I was going to run out of yarn before I finished it to a ladder – yes a ladder – in a sock I’ve been playing around with since the summer it has not been a good couple of weeks in knitting.  Here’s hoping things will get better.

I’m still hard at work with sooper seekrit projects and an update on that will probably come next week.  In the meantime,  I’ve been working on my Oaklet Shawl.  Thing Two wanted in on the progress pic so here he is… 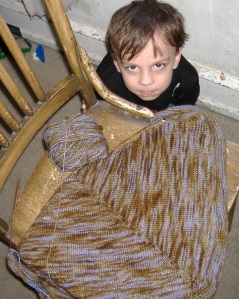 But the big news is my swap package came in the mail today and it’s fantastic!  The due date isn’t until the end of the month so getting this early is super cool.  It’s everything I could have dreamed of and more. 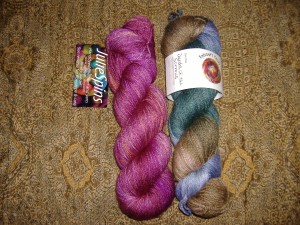 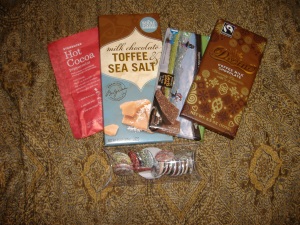 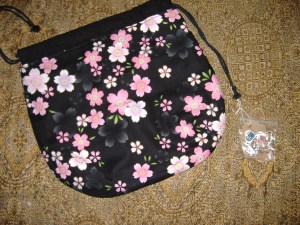 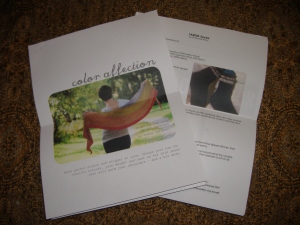 Those are Dr. Who stitch markers with the project bag.  Chocolate, patterns, and a project bag.  I sure could get used to this kind of treatment. 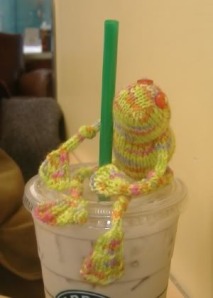 I’ve been sitting on this pattern for going on seven years now and have yet to get it into shape so I can publish it.  It was one of the first things I ever designed.  If I can pull it off, I’ll be publishing it this fall and offering kits to make it up in my Etsy shop.  Here’s what I got for the frogs for my pattern pictures. 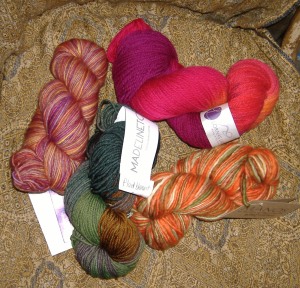 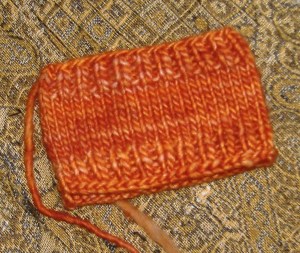 You can see the final product on my Facebook page.  The yarn is Madelinetosh Tosh Merino DK in Terra.  I’m not entirely sold on the yarn.  It has absolutely no give which was a bit of a pain.  I’m using some Tosh Merino Light in a shawl but that’s using a fine yarn on bigger needles so stretch really isn’t a factor.  I bought it because it was the perfect color, but I may choose differently the next time I need a DK weight yarn.  There are still two more parts of the project that I want to get done this week, it just depends on the kids and my school schedule.

To break the tedium of the sooper seekrit project, I joined a knit along on one of my knitting boards and started the Oaklet Shawl.  I’m using Madelinetosh Tosh Merino Light in Vanilla Bean (which I love) on US Size 6 (4.0mm) needles.  I’m kind of meh on the pattern — I usually like my shawls to be more lacy, but it was a matter of being in the right place at the right time.  Besides, all of that stockinette really shows off the colors in the Vanilla Bean. 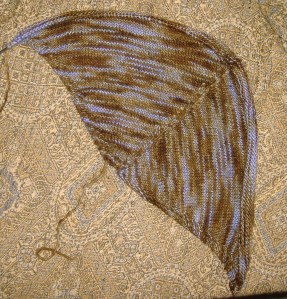 I’m ordered most of this yarn from Eat.Sleep.Knit with the $50.00 store credit I won when I ordered that sweater’s worth of Madelinetosh Tosh Merino Light in Golden Hickory.  Some of their prices are a little bit more than my LYS but their stock is good and shipping is super fast.

Look for pics of the sooper seekrit project next Sunday.  Happy knitting!